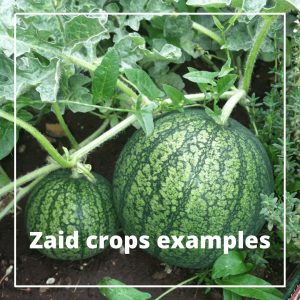 Zaid Crops are small Time Period crops also known as summer crops and in some Asian region they also known it as Grishmkal crops, cultivation time period of zaid crops is between harvesting of rabi crops and sowing of kharif crops, cultivated during February month to June month, Zaid crops are early maturing crops. In this blog we are going to list all Zaid crops examples same as rabi crops examples and kharif crop examples we have written with all details like botanical name of the crop, family of the crop from where is origin place, Chromosome number of that crop and how it is used.

There are very few zaid crops example, because of short-term cultivation period and some crops in this zaid crops list are common in rabi crops and kharif crops because we cultivate these crops in all different growing seasons.

We have divided zaid crops into four categories

One more popular name of muskmelon is Cucumis Melo, because it belongs to the family of Cucurbitaceae. There are many health benefits of Muskmelon like it controls blood pressure, promotes digestion, for skin health, it is also very beneficial. Top ? Muskmelon producing countries are China, Turkey, Iran, India.

Cucumber ? is a very popular vegetable, consumed all over the world, it contain an enormous amount of fibres that make digestion easy. It belongs to the Cucurbitaceae family. Many research shows it is helpful in controlling blood sugar. Top Cucumber producing countries are China, Russian Federation, Turkey, Iran, Ukraine.

Bitter gourd is consumed all over the world. It comes from the family of Cucurbitaceae, there are many health benefits of Bitter gourd; it helps in controlling blood sugar. Bitter gourd has Cancer-Fighting properties. Major Bitter gourd growing countries are Mexico, Spain, United States, Netherlands, New Zealand.

Pumpkin ? belongs to the family Cucurbitaceae. It is consumed all over the world and very popular vegetable, health benefits of pumpkin are like it is rich in nutrients, it helps in controlling blood sugar, good for bone health as well. Top Pumpkin growing countries are China, India, Russian Federation, Ukraine.

Brinjal is most popular crop in this Zaid crops examples. It is consumed and cultivated all over the world, Brinjal belongs to the family of Solanaceae. Also commonly known as eggplant ?. Top brinjal growing countries are China, India, Egypt, Turkey, etc. 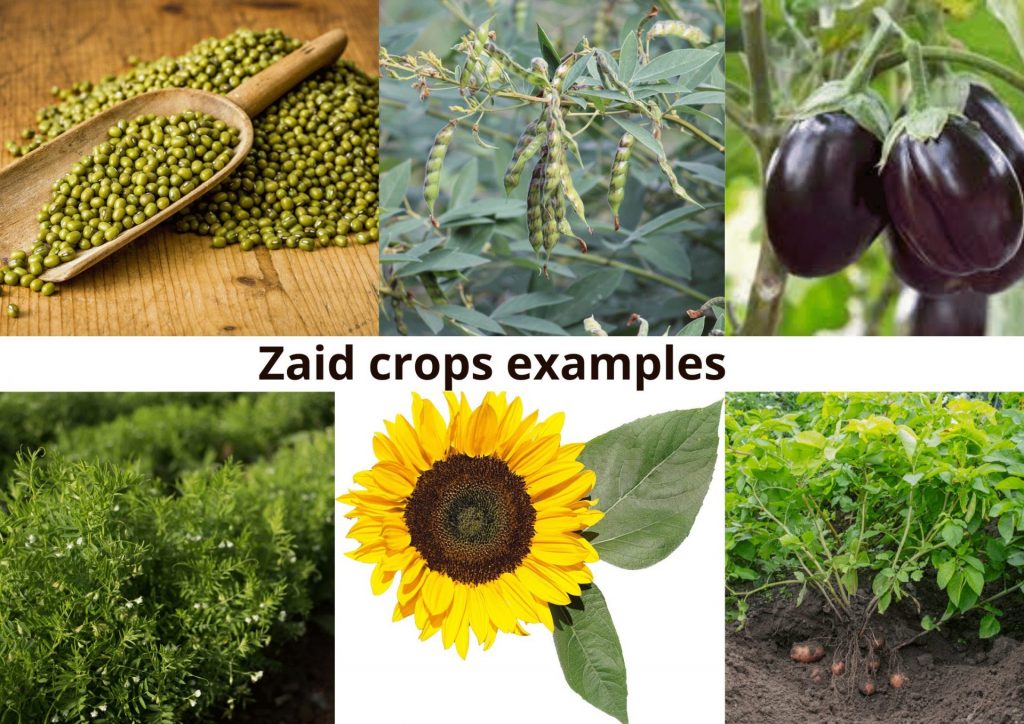 In English, we know Bajra as Pearl Millet, mainly it is grown in African and Asian countries, mainly barley is known for its health benefits, it is best for the people having heart related problems, Pearl Millet also controls bad cholesterol of the body.

Sorghum is the eighth crop in this Zaid crops examples post. Sorghum is best for the digestion. It also contains a large amount of vitamins and minerals, easily available in the market. Mainly cultivated in African and Asian countries.

Mung bean is one of the most popular crop in this Zaid crops examples post. It is consumed all over the world, we also cultivated as green manure for its nitrogen fixing ability.

Pigeon pea that is commonly known as red gram. Farmers do red gram cultivation in both kharif and zaid season, so don’t get confuse. It is also listed in kharif crops examples and zaid crop examples. It is one of the most important pulse crop consumed all over the world.

Lentil contains a large amount of fibre. It is good for digestion; it decreases the level of cholesterol in the body, it also protects us from diabetes, we also known it for preventing constipation, Lentil is consumed all over the world.

Gram commonly known as Bengal gram, Bengal gram cultivation is done all over the world, and also consumed in most of the regions in the world. There are many health benefits of Bengal gram like it boost energy, prevents diabetes, etc.

Potato also comes under the rabi crops example and also in zaid crops because the farmers do potato cultivation in both of the season. Farmers do sowing of potato in zaid season.

Sunflower is a common crop between rabi crops and zaid crops farmers do sowing of sunflower in zaid season. Sunflower ? is an important oil crop farmers cultivate sunflower as cash crops.

Groundnut is kharif crop and also comes in Zaid crops examples because farmers sow it in zaid season and harvest it in kharif season. It is a very important crop with high demand all over the world.

We know sugarcane as a kharif crop, but farmers sow it in the zaid season so it comes in both zaid and kharif crops, sugarcane is a cash crop with high demand in the market.

Farmers cultivate jute for its fibre or use of green manure, jute fibre is used to make clothes, carpets, gunny bags, etc. Because of the fast-growing ability, it is very popular as green manure.

Farmers do sowing of Cotton by in the zaid season and harvesting in kharif season, so it comes in both season. It is a very popular crop, with the growth of population demand of cotton is also growing.

All we collect The Information by books and different agriculture websites like icar, nabard agriguru, etc.