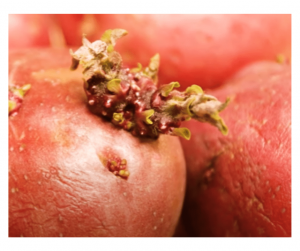 All About Potato farming, Planting, Care & Harvesting Of Potatoes

Hello friends, welcome to our new blog on our website/app rabi crops. Today we want to introduce the farming procedure of the most loving vegetable on the earth. We also call it by different names like “Poor man’s friend and the most common name is ‘The king of vegetables’ these names are called by different people in different regions of the world, and that is our favorite potato.

Actually, the potato crop refers to the root and tuber crop, which is one of the most important staple food that is consumed in most parts of the world since it is rich in carbohydrates, protein, fat, and fibers. They also provide some minerals and essential required vitamins to the human body. We consider root and tuber crops the second most important source of carbohydrates after the cereals. 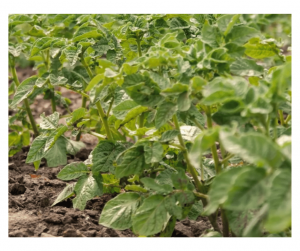 Here we are going to list some other root and tuber crops that are rich in carbohydrates, minerals, and other essential vitamins like cassava (Manihot esculenta Crantz), yam (Dioscorea spp.), and sweet potato (Ipomoea batatas L.), potato (Solanum spp.) and edible aroids (Colocasia spp. and Xanthosoma sagittifolium). These crops are widely grown and consumed all over the world as subsistence staples also in many parts of Africa, Latin America, the Pacific Islands, and Asia.

Owing to this high demand for potatoes, it is one of the best cash crops that is grown by farmers all over the world. Farmers look upon it as a profitable business.

Those farmers have less land. They can grow in their homes if they have tiny space, as we know potato farming doesn’t need much attention. In this blog on potato farming, you will get all the important knowledge required for it, scroll down to the entire blog where you will find its origin, growth phase, maintenance, irrigation facilities, fertilizer requirements, propagation, and varieties.

Use of potatoes in our daily life:

Health Benefits of potatoes in our daily life: 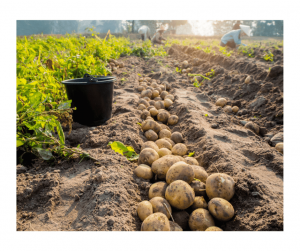 Potato is an economical, wholesome food consumed by over one billion people all over the world. We know it for its nutritionally superior vegetable, its edible protein content, and low-cost energy source for the human diet.

Because of its popularity, potatoes emerged as the fourth most important food crop after rice, wheat, and maize. Potato is one of the main commercial crops grown in the country.

Potato is a major food crop, grown in over 100 countries around the world. The native South Americans brought Potato under cultivation, possibly 2000 years before the Spanish conquest in one village of the Andes. In Europe, they introduced it in 1580. A.D. to 1585 A.D. in Spain, Portugal, Italy, France, Belgium, and Germany. At present, China, Russia, India, Poland, and the U.S.A. contribute a major share of the total world in growing potatoes.

India is a major producer of potatoes. majorly farmers do potato farming as a rabi crop,zaid crops They do potato farming in 23 states. Major potato farming states in India are Uttar Pradesh, West Bengal, Bihar, Punjab, and Gujarat, accounting for a lion’s share in total production.

India has achieved tremendous growth in potato production during the last four to five decades. The annual compound growth rate of potatoes is higher than other major food crops in the area, production, and productivity.

We are listing some important varieties of potatoes that farmers used to cultivate potatoes in India. 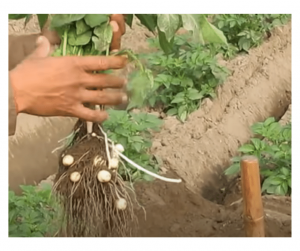 We are listing some important types of potatoes that farmers used to do potato farming all over the world.

To start potato farming, land preparation is a very necessary component. If we avoid this, it will cause the deformation of potato tubers and soil should be free from stones and clods.

To remove the unwanted materials from the soil and provide good aeration, we should plough the soil to a depth of 20-25 cm and then harrow it. Before seeding, make sure the soil has enough moisture.

We will suggest farmers, after plowing, leave the field for 2 to 3 days for proper exposure to the sun. It will make field weed-free and harmful soil-borne insects will also die.

Earthing up operation is a key operation for tuber operation. In this, we draw the soil up around the base of the plant for proper tuber formation; We did it when the plant attains a height of 15-20 cm. We can perform the second earthing operation two weeks after the first one if required. 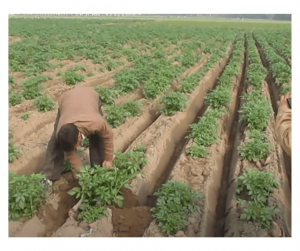 During the land preparation, farmers can show green manure and incorporate it before sowing potato seeds in the field. This will increase the production of the potato.

Soil requirement for potato farming is between pH ranging of 5.0 to 6.5 it is best suitable for growing potatoes.

For doing the potato cultivation, we will prefer Light soil, which is acidic in nature rather than Alkaline or saline soils.

because they limit scab diseases and promote more uniform soil temperatures and make harvesting of the crop easier.

If the farmer is cultivating potatoes for commercial purposes in the hilly areas, they should notice soil should be loose, firm, and without a compacted layer, which should not hinder root penetration.

We will recommend farmers to do potato farming in the naturally loose soil. This will promote the size of the tuber and we will get wonderful production of potatoes.

Fertilizer application plays a major role in producing good yields. We prefer to apply fertilizers that are organic that don’t harm yield, soil, and environment.

We also enlisted the details of various farm manures which are good for soil and crop. Organic fertilizers are fertilizers that are got from everyday waste or unwanted material like vermicompost, animal manure, soya meal, bone meal, blood meal.. etc.,

Now regarding potato cultivation, we applied fertilizers at different stages of the crop growth period. For any crop, nitrogen, phosphorus and Potassium are life survivors. Now here we will let you know how we applied different ratios.

(ii) At the time of sowing, we will suggest applying a 3/4th dose of nitrogen, and a full dose of phosphorus and potassium fertilizer.

(iii) Remaining, 1/4th dose of Nitrogen fertilizer at the time of earthing up operation, after 30-40 days of sowing.

If farmers have enough time before sowing, we suggest they grow green manure and incorporate it before sowing the seed of the potato. There are many advantages of green manure it will increase the production of potatoes.

We can do propagation of potatoes by two different methods:-

Propagation through seed tuber is a very common method of propagation. got popularity in ancient times and it is very popular till now.

The main basic requirement for a healthy potato yield is the parent crop from which we are taking tubers should be healthy and disease-free.

The ideal weight for the seed tuber that we are going to use in potato farming should be between 30 to 40 grams. Tuber weight of over 45 grams is not ideal for propagation. For a big-size tuber, we will suggest cutting it carefully into small pieces by keeping an eye. It will decrease the cost of propagation.

The instrument you are using for cutting the seed tubers, like a knife, should be disinfected before using. It will stop the spreading of fungal infections in tubers.

We propagate potatoes through tubers that have a dormancy of 8-10 weeks.

We normally do planting during October–November.

Eyes on the surface of tubers have axillary buds that help potato propagation. For fast and vigorous growth of potatoes, we use sprouted tubers for planting.

We also used carbon disulphide 30 g/100 kg of seeds for breaking the dormancy and inducing the sprouting of tubers.

About 3000–3500 kg/ha of seeds are required for potato cultivation.

To develop sprouting, we placed tubers in cold storage for 10-15 days before planting and kept them in a pre-cooling chamber for 24 hours. We then spread it in cool and shady places to sprout.

Mini tubers whole or cut are used as planting materials. Larger seed potatoes are generally cut down into multiple pieces. Each tuber, however, must contain eyes for the development of the plant.

But it is not advisable to use cut tubers as it enhances the chance of transmitting viral and bacterial diseases.

The seeds must be treated with 0.3% mancozeb before sowing. This is to avoid soil and tuber-borne diseases. 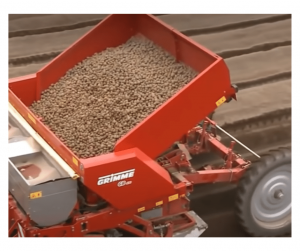 Propagation through true potato seed is not very popular but in the coming time, it is going to be a game-changer because day by day this propagation method is becoming easy and popular among the farmers of Asian and European countries.

There are many advantages of true potato seed that every potato-growing farmer should understand:-

For Doing potato farming with true potato seed farmers need to grow a nursery first then they can transplant the plant in the major field, we will suggest growers grow a nursery in a raised bed, and after the seedling grows 8 to 10 cm in height transplant it to the main field.

We will not recommend farmers for sowing directly in the field. It will not give wonderful production and farmers need to remove the unwanted plant, in this condition weed management will also become tough.

For commercial purposes, we used True potato seeds, which help in minimizing the spread of viral diseases.

The seeds are raised in nursery beds like other vegetables and seedlings are transplanted 30 days after sowing. For raising one hectare of the crop, a quantity of 100 g of seed is required.

The critical period of weed competition is up to 60 days, and it is essential to keep the field weed-free during that period.

Take up the first hoeing after 25days of planting in plain areas and 40-45days in hilly areas when the crop attained the height of 8-10cm without disturbing stolons. We can take second hoeing and earthing up on the 60th day to keep weeds away. 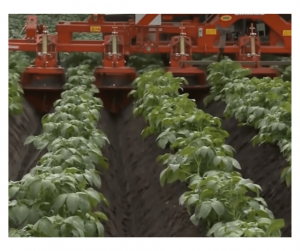 Alternatively, pre-emergence spraying of weedicides such as Flucholralin (0.70-1.0 kg a.i./ha) or Pendimethalin (0.50 kg/ha) is recommended for controlling annual grass weeds and broadleaf weeds.

Common weedicides that are used in potato farming are:-

Various pests, diseases, and also weeds, which incorporate crop growth, can attack potato crops. So proper measures should be taken and pesticides or fungicides should be incorporated.

Let us also go through the pests and diseases that attack potatoes and their Biological Measures:

For a better yield of the crop, we must do immediate irrigation after sowing. This allows for proper seed germination.

The irrigation frequency varies from place to place.

For example, we irrigate once in a week in cool weather areas whereas in tropical climates it needs frequent irrigation. 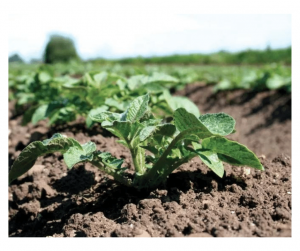 On average, they need 4-5 mm water per day- just enough to maintain the moisture level and temperature and thus promote uniform tuber formation.

We did the last irrigation, about fifteen days prior to harvesting. This promotes the hardening of tuber skin before harvesting potatoes.

During the period of germination, potato needs more water. If we don’t irrigate the potato, the production of the potato will decrease and germination will be also very less.

The process of tuberization starts after 10-15 days of Stolonization. We also known it as early tuber development. It is a very important phase of the production of potatoes.

Before harvesting, make sure the soil is completely dry to keep soil and potatoes moisture-free.

We used Gramoxone Extra to kill the vines to ensure a good skin set for the tubers. The treatment is done a week before harvesting.

In order to avoid bruising or any other damage to the tubers, they are carefully dug using a potato digger manually.

It is better to do harvesting before the temperature rises to 30⁰C and the time of harvesting differs from place to place.

Under good crop management, 350-450 quintals of marketable potatoes of good quality can be produced from one-hectare of land.